The first journey to BLESS Online

It’s the beginning of the living world of BLESS Online

Several impressive places and magnificent scenes were collected in order to create the meaningful memories at first CBT where adventure starts at the southern continent of BLESS.

Ruins of Padana, the starting region of the Amistad Race El Lano is the city constructed by Aqua Elves with the power of magic. El Lano is not only the capital city of Aqua Elves, but also where the race begins. It is located above the southern ocean of the southern continent of BLESS. El Lano tends to have a clear ranking structure. By looking at the elegant and fancy upper district & the dark and isolated lower district, you can feel the converse atmosphere of El Lano. Aqua Elves are beginning their endless adventure for the faith of their race since they were born from the ‘Tree of the World’, the emblem of hope which stands right at the center of El Lano. Shakira, the capital city of the Pantera Race.

Shakira is the starting region of Pantera and the capital city of the race, which is located at the rocky mountain of burning desert. Since Panteras only believe in power and fighting techniques, scent of blood blended with desert sand can be felt in somewhere at Shakira. The training district located at one part of Shakira is the place where battle is the regarded as an important matter and where the spirit of Pantera is appeared at its best. Panteras become the true warriors only if they pass the harsh coming-of-age ceremony. I presume the birth of true hero at this place where only the blood, fist, and will of warriors are left.

“The city of warriors, Shakira” 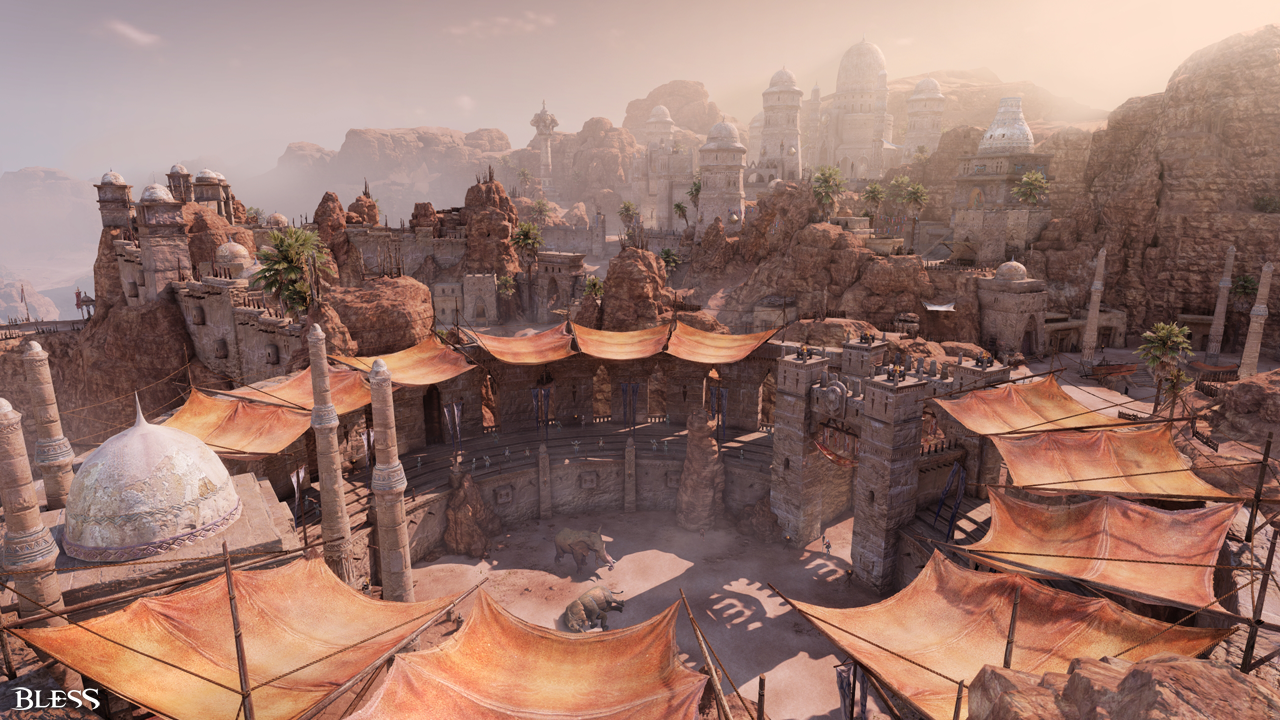 Amistad, Aqua Elves, and Pantera who all started in different regions meet up at Spetia, the biggest city in the southern continent. You all have diverse characteristics and tales, but you will all meet up at Spetia to resolve new problems together with new people.

“Welcome to Spetia, the biggest city in southern continent” Most of the people are transferred to the city by gondola since Specia is the city of water located above a lake. And many visits Spetia to rest and prepare for next journey.

The city of old ruins, Campany

Once you are in Spetia, you will enter ‘Campany’ and continue to start new adventures and tales. Campany is the city as wealthy and developed as Spetia, and also is the capital city of ancient empire. Many parts of the region still have the trace of antique remains. Because lots of the heritage of ancient civilization is still there, it is known as the city of living history. Outer part of Campany contains huge breadbasket supplying Union that evokes agricultural scenes. Since some mysterious problem has stroke, Galopa and Pirlo who run a farm are in trouble. Your help is desperately needed for this problem.

Nabara, the city of the sun

When you leave Campany and head towards south, the path is connected to the city of the Sun Nabara. Nabara is totally surrounded by sand that creates barren environment. To protect the city from this harsh environment, the city is constructed inside the tall and thick ramparts. Recently, there were frequent reports that Nol is invading southern region of Nabara. These reports have increased the concerns of citizens.

“Nabara, the city of the sun” The first dungeon: Hideout of Giskar

The first instance dungeon you will encounter is the Hideout of Giskar. The Hideout of Giskar seems like an abandoned mine and has gloomy atmosphere. Since it is single player dungeon, it’s not very hard to clear but you will face some nervousness. Moreover, because there are lots of narrow paths and encountering multiple enemies at once, you have to be careful.

“Entrance of Hideout of Giskar” Additionally near the nest of outlaws, the first dungeon ‘Hideout of Giskar’ is waiting for you.

When you are heading to south of Nabara, the vivid wild land Nolando will be in your sight. Not only the scenes are beautiful, but also it is very impressive to see how the atmosphere changes by the night and day. The most amazing sculpture in Nolando is the gigantic wall across the center of Nolando. This gigantic wall was to protect from barbarians in the past time and it seems to be there are other remains here and there from the past. The southern region of Nolando has lots of secrets, and people with courage often adventure this region.

“Inner part of the Remain of sleeping scales” So, I assume now you can expect what kind of adventures will be in your journey.